This article is part of our anniversary special for CliMates’ 5th birthday!

This article is written by Gwenael Podesta & Sabrina Marquant

Much time has passed since CliMates birth 5 years ago, and even more since the creation of YOUNGO in 2009, the youth constituency at the United Nations Framework Convention on Climate Change (UNFCCC). This was a major milestone in the recognition that youth is a critical agent of change, and their proper involvement is essential to reach the objectives of the Convention. A lot has happened over the years especially in 2015,with the adoption of the Paris Agreement and the Sustainable Development Agenda, which has brought about a new diplomatic landscape. This article will take stock of the main achievements of Youth in the climate negotiations, and will identify the challenges they will face in the future through 5 main points. 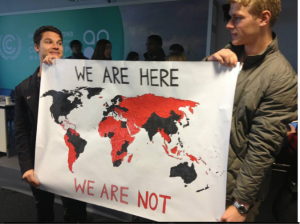 The concept of Intergenerational Equity refers to the fairness in the intertemporal distribution of the endowment with natural assets or of the rights to their exploitation (OECD 1997). This means that the future generations have the same right to live in a healthy planet with a stable climate as the current ones. However, according to Luke Kemp, YOUNGO Intergenerational Equity working group (IntEq) member, “this principle has never been explicitly enshrined into international law despite an increasing legal attention”. YOUNGO, for which this principle is of prime importance, created in 2012 a working group dedicated to this issue in order to campaign both for the inclusion of this principle in the climate regime and to suggest practical mechanisms to operationalise the concept.

“Thanks the intense lobbying of YOUNGO and its dedicated members, the 2015 Paris Agreement became the first multilateral environmental treaty (even the first legally binding treaty in general) to codify the principle of intergenerational equity” said Luke Kemp.

This was a major achievement, but the fight is far from over. The Inteq Group is now working hard on finding new ways to represent the interests of future generations within the climate talks and within the UNFCCC arena and outside to make sure that the implementation of the national contributions, in relation with the SDGs, will better incorporate intergenerational equity”.

Achievement 2: Show that youth is ready to take action and already is

The last years have been really incredible intense for the youth in term of lobbying for the recognition of youth as agents of change, especially on the sustainable development and climate issues. In 2013, thanks to the UNFCCC secretariat, YOUNGO has started a collaboration with the UN Secretary General and his special Youth Envoy, Ahmad Alhendawi. In 2014, in the lead up of the UN Climate Summit in New York and at COP20, YOUNGO started to present youth as agent of change by launching a series of projects as the Youth climate virtual platform, by strengthening collaboration with other youth coalitions which has been contributed to show a new face of youth etc.

The turning point has been reached in November 2015, with the 11th Conference of Youth – COY11. The objective of this event was to build a momentum before Paris and to show the world that young people are part of the solution and already engaged on global solutions, and by gathering young people across the world committed not only to climate change issues but also to cross-cutting issues in order to create synergies after Paris.

Since Paris, on the road to Marrakech and COP22, YOUNGO is continuing on this way at the regional and international levels with the preparation of the COY12. On the road to the Paris Agreement implementation, YOUNGO wants also to take part of the process and some organizations within YOUNGO are already extremely active on the action agenda. At the more global level, Ahmad Alhendawi is launching a global projects of youth leaders on SDGs.

The Article 6 of the Convention is dedicated to climate change education, training, public awareness, public participation, public access to information and international cooperation on these matters for the effective implementation of adaptation and mitigation actions. Obviously, this topic is very important for Youth, and YOUNGO has been fighting for years to keep this issue at the top of the climate agenda.

In 2012 at COP18, Parties agreed on the Doha Work Programme, whose aim is to accelerate the implementation of the Article 6 of the Convention. Whereas Parties were streamlining the Geneva Text (which was the draft version of the Paris Agreement and the Decision 1/CP.21) a few month before Paris, some Parties started to make some reserve on this issue.

Hopefully, the content of Article 6 has been reaffirmed in the Paris Agreement in the end, and has become “Action for Climate Empowerment” (ACE, also not to confuse it with the Article 6 of the agreement). Building synergies with the SDG 4, ACE is now secured in the Climate regime, and will set the foundations of durable climate action. 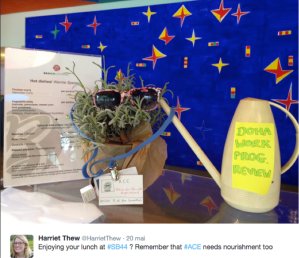 If a relatively high number of young people manage to get to the UNFCCC conferences, the funding issue remains crucial for them. Direct result: the proportion of young people from the Global South attending the inter-sessions in Bonn is extremely low, as most of the Youth NGOs concentrate their funds on the COPs. Global South Scholarship has been one of the top priorities of YOUNGO for the year 2016.

An efficient way to ensure a sustained youth participation to the process is to instore Youth Delegate Programmes. A recent report from CliMates counted 25 countries implementing such programmes at COP21, very far from the 196 that are Parties to the Convention. There is room for significant improvement here. Additionally, Youth Delegate Programmes is a unique opportunity to raise awareness among young people on climate issue, and to promote education to climate change nationally.

We can be glad that nowadays, just as companies can’t afford not to take climate change into consideration, youth inclusion in international negotiations process is now a must-have. In the UNFCCC YOUNGO is recognized as one of the 9 constituencies, just like businesses or indigenous peoples. Many other conventions (e.g. CBD welcomes observers from the Global Youth Biodiversity Movement) and international institutions (the UNESCO helds annual International Youth Forum, the UNEP has an entire office working on this issue…) have dedicated programmes to youth involvement.

At a first glance, everyone should be happy. If we look deeper on the features of youth participation, we can notice that often, youth participation is limited to creative work unrelated to the substantial issues at stake (video contests, social media, etc.) or to the showcasing of grassroot activists designated as ‘Young Leaders’ that make great resources for storytelling.

All these initiatives are welcome obviously, but they are ‘low hanging fruits’ (not very demanding for the institutions) and they clearly not enough to ensure that youth voice is heard in the international negotiations. The focus should be cast on inter-generational dialogue instead, as young people have demonstrated their capacity to inform decision-making on climate issues.

After all, Youth faces the sames issues as the newborn Paris Agreement. After a first recognition phase, and now that the framework is set to work properly in the future, it has to move swiftly toward an implementation phase. Delayed action is not an option.

About the authors: Gwenaël Podesta is a Master’s student in environmental economics at AgroParisTech (Université Paris Saclay). He attended several UNFCCC conferences with CliMates and participated in COP 21 as liaison officer with the delegation of el Salvador. This year, Gwenaël is the project coach of Negotiation Tracking.

Sabrina Marquant is a former YOUNGO Focal Point, and one of the YOUNGO Education WG coordinator in 2015. Since 2012, she has been following from the inside the UN Climate Talks and be part of the preparation of the Paris Agreement negotiations with CliMates as part of the Negotiation Tracking team. She is now working as a policy officer on the pre-2020 ambition and the climate Action Agenda with Climate Chance.

Special thanks to Luke Kemp for his help in this article with Intergenerational Equity. Luke is one of “main” active policy officer within the YOUNGO InteQ working-group. A Lecturer in International Relations and Environmental Policy at the Australian National University