This article is divided in 3 parts. Check out the 2nd part here and 3rd part here!

This article is written by Solène Dengler.

When studying economics you learn among others about game theory, a field of study that studies strategic decision making in situations of competition and conflict, cooperation and interdependence under specific rules. A “climate dilemma” is often described, derived from the Prisoner’s dilemma by Albert Tucker where the best possible outcome for all parties cannot be achieved given the short term benefit from an individual perspective to quit. The best example of course is the announced US exit from the Paris agreement. While trying to apply these theories to better understand the process of negotiations as an observer, you quickly realise that you lack large amounts of information about preferences of actors, their knowledge, strategic actions they are allowed to make and how each decision influences the outcome. And that while the ice is melting you may only really see the tip of the iceberg.

Finance issues have been key for Parties since the beginning of climate negotiations, the financial support of developed country parties appearing as a driver for the mobilisation of developing country Parties. COP23 started after the announcement of the United States withdrawing from the Paris Agreement and cancelling part of their financial contribution to the Green Climate Fund, which is the main tool created towards the objective of mobilising $100bn for both mitigation and adaptation projects in developing countries.

For developing country Parties, the need is evident for increasing pledges further and faster, with new and additional finance and to clarify accounting rules for this purpose. Very few financial pledges were made during the high-level segment. There seems to be an overall belief that these pledges will be made rather in 2018 in preparation of COP24 and perhaps also during the One Planet Summit on 12th December 2017 in Paris, announced by President Macron. However, parties or group of parties need to take the lead very fast on this subject in order to help the whole negotiations move forward after the end of the US leadership on this subject. 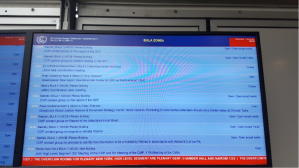 A not-so-technical set of negotiations

Technical negotiations for climate finance at COP23 concentrated on the following aspects:

COP23 was supposed to be a conference with technical negotiations, but it became clear quickly that the issues to be discussed were actually quite political. As an observer, you sometimes had the feeling that lengthy discussions on technical issues were really a distraction from side negotiations about deeper divides that emerged again at this COP between developed and developing country parties.

However, the first day of the second week of COP23 was Climate finance day and reminded the whole international community that issues negotiated inside the negotiations were just the emerged part of the climate finance iceberg, now discussed in different initiatives and forums. With the USA announcing to leave the Paris agreement, however, non-state actors have really become political and stepped in to ensure the commitments would still be met, such as Bloomberg announcing his network would just pay the amount due by the US government. Discussions around green bonds, the launch of the InsuResilience initiative and divestment took a whole other dimension in this context. About the author: Solène Dengler is CliMates’ Empowerment Team co-director. She was previously involved in research projects such as financing small-scale energy projects, climate migration in Alaska, or the Youth on the Move project. She now works as a consultant for the World Bank in Vienna, on a program on sustainable urban development and governance in South-East Europe.