This article is written by Nicolas Pinceloup.

On November 30th, next to the polar boat “TARA” and its robust and majestic shape, with the Eiffel tower in the background, a historical conference was held at the Tara Expedition Pavilion. Well-known political figures attended the conference such as the President of Palau, the President of Kiribati and one of the leaders of the fight for the recognition of the Ocean at the international level, Prince Albert II of Monaco, as well as  delegates and ministers of 10 countries (Canada, France, Fiji, Monaco, Chile, Mexico, Palau, Kiribati, Aruba, New Zealand), which signed a new declaration that brings hope for the other world: our océans. 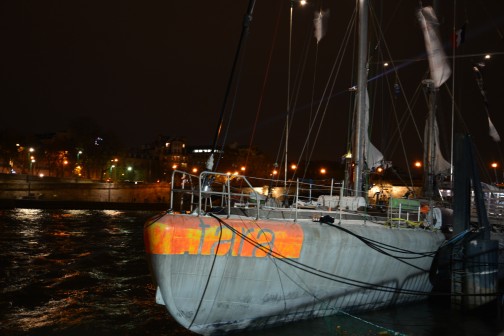 END_OF_DOCUMENT_TOKEN_TO_BE_REPLACED

This article is written by Gwenaël Podesta.

The first time I had the chance to attend climate change negotiations, I thought I was going to the COP. What a surprise when I discovered that I ended up at ADP 2.11! A quick internet research told me ADP stands for Ad Hoc Working Group on the Durban Platform for Enhanced Action. What a barbaric name… Considering how informative the acronym was, better telling you that I was not really advanced.

I’m sure I was not the only one in this case, wondering what the hell was this ADP all the negotiators talk about, but no one has heard of? Well, let me tell you about this mysterious ADP.

END_OF_DOCUMENT_TOKEN_TO_BE_REPLACED

This article is written by Cecile Pilot.

Early September, President Obama depicted a stark future without climate action. During the Conference on Global Leadership in the Arctic, he urged representatives of more than 20 countries to accelerate concrete commitments to avoid harsh consequences for future generations. He said that if we do not fix the issue of climate change soon, children around the world would be « condemned to a planet beyond repair ».

END_OF_DOCUMENT_TOKEN_TO_BE_REPLACED

This article is written by Héloïse Pichot.

With COP21 looming in, it is time to take a closer look at the national positions on climate change and mitigation efforts. An easy way to do so is to refer to the official stance of the nations in international negotiations; another is to look at the domestic policy and actions. Surely they should be coherent? Well, perhaps not always, as the case of Colombia demonstrates.

Why talk about Colombia, and not for example Argentina, Morocco, or Thailand? If Colombia is most known for its drug production and decades-long guerilla between the FARCS and the government, it is also a mega-diverse country. Indeed, it ranks second when it comes to biodiversity per square unit thanks to a wide range of unique ecosystems, such as the Sierra Nevada, the paramos, or the open savannas. This already gives a good argument to get a look at what the Colombian government thinks of climate change, wouldn’t you agree?

END_OF_DOCUMENT_TOKEN_TO_BE_REPLACED

This article is written by Pauline Fayan.

What is the history of the attempts to control climate change ?

In 1997, the Kyoto Protocol was ratified. Its objective was to reduce global emissions of greenhouse gas by 5.2% below the 1950 level by 2012. As emissions have not ceased to increase since that time, parties agreed on the need to find a new tool, more effective and which would include all Parties, to manage the post-Kyoto Protocol period. Talks focused on the new agreement to come in Copenhagen in 2009 (COP15). Unfortunately, the 196 parties did not manage to agree. As the trial failed, the Kyoto Protocol has been extended to a second period from 2013 to 2020 but, in 2011, Parties decided that another agreement had to be concluded not later than 2015 to have enough time to act against the global warming.

In Lima (2014), the COP co-chairs proposed a first draft of some 37 pages. When Parties met in February 2015 at the Geneva intersession, they reported that the proposal was not reflecting their views. Therefore, all provisions were submitted and included to a massive text of 88 pages.

The aim of the following intersession in June 2015 was to streamline the text, compiling similar options. In two weeks, parties only reduced the text by 5%. Running out of time, they mandated the United Nations Executive Secretariat to propose a simplified text that would include all ideas.

END_OF_DOCUMENT_TOKEN_TO_BE_REPLACED

This article is written by Clément Métivier.

Imagine being in a room with 196 of your peers. Your goal? Deciding on what will be on the table for dinner. Your mission? Make everyone agree on what dish to cook, when to serve it, at what temperature, and whether everyone should eat that dish or not. This would be quite a challenge for you, right?

Well, this is pretty much what is happening during international climate negotiations. This year, the 196 Parties (195 States and the European Union) that are belonging to the United Nations Framework Convention on Climate Change (UNFCCC) have to negotiate on a new climate regime, which has to be completed by the end of 2015 at the 21st Conference of the Parties (COP21), and will then come into effect after 2020.

Climate negotiations are based on a consensus principle. In order to take decisions, Parties must all agree with each other. Since there are 196 of them, reaching consensus is therefore a very tricky process, especially because the issues addressed are way more important than a dinner. Indeed, reducing greenhouse gas emissions and adapting to the negative impacts of climate change are two daunting tasks, with huge social, political and economic consequences, which require all countries to rethink their development pathways and redefine their energy system, among other things.

At that point, putting 196 actors around a table and aiming at reaching consensus does not seem like a good plan. However, taking a closer look at the climate negotiations may introduce a more optimistic perspective. Indeed, all Parties are not usually present during the facilitated groups, when all the topics related to the future agreement are discussed in detail (for example, mitigation, adaptation, technology, transparency, or finance). Within those facilitated groups (also called contact groups), around 50 delegations are usually present, which makes dialogue a little bit easier than with almost 200 countries. In addition, the existence of alliances among countries leads to situations where one country speaks on behalf on its group, and express a common position, thus making the negotiation process smoother.

END_OF_DOCUMENT_TOKEN_TO_BE_REPLACED

Read the 1st part of this chronicle: Alice’s adventures in ADPland (1/2)

In the next room Alice entered, all the Kings and Queens were solemnly sitting around a large table, so large that it went from one end of the room to the other. Stuck in a tiny corner, speccy people were preparing their fingers to write each and every word that would be said.

The White Rabbit cried out :

Silence in the court ! I will read the accusation :

The Kings and Queens, they had a clean atmosphere,

Since the beginning of  time.

The Kings and Queens, they stole this clean atmosphere,

And drove the temperature up !

All are guilty, and yet no one is. The first defendant – a black King – said :

We agree that the matter requires our best attention, but we only stole a small share of the clean atmosphere. And it seems like all  these changes will affect us, more than the others. How unfair is that ?

That is true, we have been stealing for many years, and not just a little. But the Court should consider that the past remain the past – there is no need to designate culprits, it is the future that we should focus our efforts on.

END_OF_DOCUMENT_TOKEN_TO_BE_REPLACED

This article is written by Thomas Désaunay.

After 20 years of negotiations, one could expect a final rush. But it is still as slow, at the risk of not reaching an agreement on time. But what is the stumbling block? Aren’t world citizens ready for a change ?

The « World Wide Views on climate and energy » (WWV) project assigned themselves with the mission of answering a question that no negotiators seem to ask themselves: what do the citizens of my country want [1] ? What do these people that I represent want ? Those, who, in case of an agreement, will be the first witnesses and actors of the energy and greenhouse gas reductions.  The same people who, in the event of insufficient action, will be the first to suffer climate change impacts.

WWV conducted a broad international study to answer this question. Far more that a simple anonymous survey, a sample of countries representative of all interest groups of UNFCCC negotiations was selected. Inside these countries, representative samples of the population were in turn selected. Before answering, the respondents attended information sessions dealing with climate, energy and international negotiations.

The results of the study were described as « surprising » by the authors.

END_OF_DOCUMENT_TOKEN_TO_BE_REPLACED

This article is written by Pierre Manenti.

Youth involvement in the UN decision-making process has a strong and quite long history, back to the 1980s when the UN General Assembly and its Secretary General Kurt Waldheim (1972-1981) asked national governments to include youth delegates in their delegations. Regarding the issue of climate change, young people had early stood up for a sustainable transformation of our societies toward greener and low-carbon models. Indeed, since 1999 and the Bonn COP5, following the reinforcement of the role of civil societies in the international climate negotiations, youth has insured its position as a inevitable interlocutor of the United Nations Framework Convention on Climate Change (UNFCCC).

Yet, young people are not only delivering a unique and monolithic speech but are on the contrary developing different positions regarding their own national and regional interests so it took several years to find a common position.  In 2005, during Montreal COP11, young people from all around the world gathered for the first time to set up preparatory meetings called “Conferences of Youth” (COY) in order to strengthen their participation to the climate negotiations. Four years later, in 2009, during the Copenhagen COP15, the UNFCCC secretariat officially granted a provisional constituency status to the youth non-governmental organizations under the name of YOUNGO. For the first time ever, worldwide youth challenged climate change with one single voice.

END_OF_DOCUMENT_TOKEN_TO_BE_REPLACED

If climate change doesn’t affect Middle Earth yet – except perhaps in the Cabot Institute of the University of Bristol’s model -, it nevertheless remains a burning issue for our world with some strong Tolkienian accents. From 1st to 11th June 2015, the World Conference Center of Bonn (Germany) hosted the annual United Nations intermediary climate negotiations and prepared the road to the December 2015 COP21 Summit in Paris. For the dozen of young delegates of CliMates and REFEDD, stepping into these international talks for fighting against climate change, struggling for making their recommendations being heard by the world leaders, and carrying the hope of worldwide youth has been quite an exciting and stimulating journey.

Up to now resting in their own comforting Parisian Shire and preparing their diplomatic adventures in the wooded Germany, they vivaciously answered to a deep and sincere call for action. Indeed, there was no need for the coming of twelve bearded dwarves and a tall magician to get them into the thrill of acting for the transition to greener societies and on the behalf of their kind. Moreover, by taking on the mantle, they challenged their national emissaries at the climate negotiations to continue to carry the torch of change towards more responsible economic and social systems. In other words, the French young delegates decided to be some unexpected visitors, those who surprise you by an unpredicted coming and try to remind you the reasons why you decided to take the road.